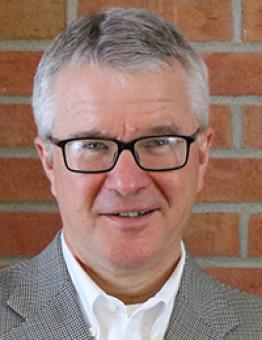 Tony Knobbe was first elected to the Board of Supervisors in November, 2016 and sworn in January 3, 2017. He was reelected for a second term.

Tony grew up on a grain and livestock farm in western Iowa, graduating from Iowa State University in 1982, with a B.S. in Agricultural Business. He worked for 33 years in banking, retiring in 2015 as Market President and Business Banking Manager for Wells Fargo Bank in the Quad Cities.

Tony has been married to Lorene since 1982 and they have two children. They live on an acreage in rural Scott County. Lorene works in administration at St. Paul the Apostle School in Davenport.

Tony has been active in community service throughout his career, having served on numerous boards, including Big Brothers Big Sisters, The Quad Cities Chamber of Commerce, Camp Shalom, Junior Achievement, The Gathering of the Green, St. Paul the Apostle Church, Vera French Housing, and The Quad Cities Foreign Trade Zone.

As part of his responsibilities on the Scott County Board of Supervisors, Tony serves on the Rock Island Arsenal Development Group Board as Treasurer, the Emergency Management Commission, and serves on Live Lead Free Coalition Board as President.