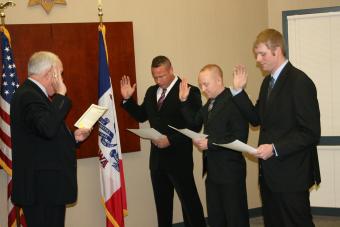 Howard Wilson graduated from North Scott High School and attended Upper Iowa University. Howard has been a Scott County Sheriff’s Reserve Deputy, worked as a correctional officer and with the Scott County Sheriff’s Office and worked as a police officer for the Dodge City, Kansas Police Department. Currently Howard works part-time as a police officer for the Cities of Walcott, Buffalo and Eldridge. Howard Wilson is certified as a lead homicide and death investigator, certified in SWAT/close quarter battle as well as a self-defense instructor.

Daniel Grafton graduated from United Township High School in East Moline, IL and attended Black Hawk College in Moline. While in high school and college, Dan worked for a volunteer fire department and while in college, Dan was elected as the youngest alderman to ever serve for the City of Silvis. Dan was hired as a policeman by Muscatine, Iowa Police Department in 2009 where he served as a K-9 officer for two years, became a field training officer and was promoted to third shift corporal. Dan was recently engaged and plans to be married in early 2016.

Eric Poirier graduated from North Scott High School in May, 2010, graduated from Scott Community College with an associate’s degree in May 2012 and graduated from Western Illinois University in December, 2012 with a business management major and a criminal justice minor. Eric was employed by Hy-Vee in Davenport as a produce clerk from August 2008 until July 2015, after which he was employed by the 7th Judicial District of Correctional Services for the State of Iowa as a residential officer and most recently was employed as a seasonal park ranger by Scott County Conservation. Eric has volunteered as a high school basketball coach at North Scott High School since 2010 and enjoys hunting and fishing.

Promotional Ceremony
A promotional ceremony was held on Monday, August 16th for Sergeant Greg Hill and Lieutenant Dan Furlong! Congratulations and thank you for your continued dedicated service to the Sheriff's Office and the citizens of Scott County! (from left to right, Lieutenant Furlong, Sergeant Hill and Sheriff...
Two Deputies Sworn In
Congratulations to our newest deputy sheriffs for Scott County, Deputy Landon Slagle and Deputy Samantha Johannes! Both deputies were sworn in on Monday, August 16th by Sheriff Lane during a ceremony at the Patrol Headquarters! (from left to right, Sheriff Lane, Deputy Slagle and Deputy Johannes)
Sheriff's Office Retirements
Congratulations to Lieutenant Tara Dinneweth and Deputy Brian Aldridge for their retirements from the Sheriff's Office. Lieutenant Dinneweth served for almost 17 years and Deputy Aldridge served over 25 years! Thank you for your years of dedicated service to the citizens of Scott County and best...
END_OF_DOCUMENT_TOKEN_TO_BE_REPLACED