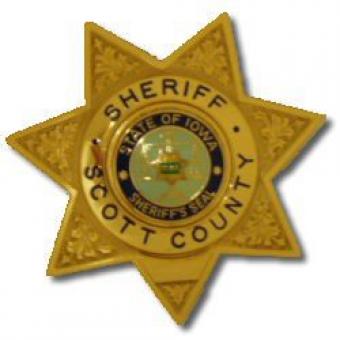 On Thursday, June 1st, at 0900, the Scott County Sheriff’s Office will hold a Promotional Ceremony in the Sheriff’s Office Conference Room on the second floor of the Scott County Courthouse. Deputy Thomas Leonard will be promoted to the rank of sergeant and Sergeant Tara Dinneweth will be promoted to the rank of lieutenant, due to the vacancies left by the retirement of Lieutenant Brian Rauch.

Thomas Leonard grew up in Sabula, Iowa and graduated from East Central High School in Miles, Iowa.  Thomas attended the University of Northern Iowa; where, he earned a Bachelor of Science in Criminology in 2004. Thomas started his career in law enforcement in 2002 with the Sabula Police Department; first, as a Reserve Officer and then promoted to an Officer in 2004. He graduated the Iowa Law Enforcement Academy in July of 2005. In 2005, Thomas was hired as a Police Officer for the University of Northern Iowa Police Division in Cedar Falls, Iowa.  He worked in patrol and was a Field Training Officer (FTO) while in Cedar Falls. In February of 2008 he was hired by the Scott County Sheriff’s Office.

Thomas was on patrol for five years before becoming a Detective in the Criminal Investigations Division.  His main duty was to supervise the registered sex offenders in Scott County.  Thomas led multiple successful sex offender sweeps during this time.  He was also the lead investigator in a major sex assault case which led to multiple arrests being made in 2014.  In 2015, he was assigned to administration as a subject matter expert / technology coordinator for the Sheriff’s Office.  During this time he worked on a number of technology projects that would assist the Sheriff’s Office; such as, the in-car and body worn cameras.    During his time with the Sheriff’s Office, Thomas has been a Field Training Officer and a member of the Emergency Service Team.  He is also a certified instructor for standardized field sobriety testing, radar/lidar, Desk- top Evidential Breath Alcohol Tester (DMT), and for a number of other computer programs that are used within the Sheriff’s Office.   Thomas currently resides in Eldridge with his wife Sara and their three children, Abby, Claire, and Hailey.

Tara Dinneweth grew up in Davenport, Iowa attending Central High School, Scott Community College, and St. Ambrose University.  Mrs. Dinneweth graduated from St Ambrose University with a Bachelor’s degree in Criminal Justice in 2003.  Tara started her career in criminal justice in 1997 working for the State of Iowa Department of Corrections in Pre-trial Release.  In 2003 she attended the Iowa Law Enforcement Academy and began to work for the Muscatine Police Department in patrol.  In 2004 she was hired at the Scott County Sheriff’s Office and worked in Patrol, the Civil Division, and Criminal Investigations Division.   Tara is a certified accident investigator, evidence technician, and field training supervisor.  Tara has completed several hours of training over the years on investigations, mental health, and evidence collection.  Tara was promoted to sergeant in March 2013 and worked on afternoon shift patrol until August 2014 when she was assigned to the Civil Division as a supervisor.  During her time in the civil division she has been committed to work to improve mental health issues and suicide prevention on and off duty.  Tara has been on the board for the Walk with Travis suicide awareness and prevention walk benefiting the Quad City area since its inception.   Tara started the 1st Suicide Support Group in Davenport through NAMI and has also taught grief counseling classes.   During her time in the Criminal Investigation Division she worked several high profile cases including the Angela Hennes 2007 cold case.  Working with DCI based on new DNA evidence and after hours of follow-up investigation, Chad Welsh was convicted in 2012 and is spending life in prison for the murder of Angela Hennes and her unborn child.  Tara received the Crime Fighter of the Year at the Community Caring Conference in October 2012 for the case and is the first woman awarded this distinction.  She also received the US Dept. of Justice LECC award March 2013 for the case.  Tara was also involved in the David Spriet missing person case, with her diligence along with other investigators they were able to locate Spriet deceased and with follow-up brought the case to a conclusion with the arrest and incarceration of John Neppl for Murder 2nd Degree.  Tara has attended several conferences to present the Angela Hennes murder case and the David Spriet murder case.  Tara resides in Scott County with her husband Mark and their daughter Kilee.  She has four adult children; Devin, Bryce, Malia, and Taylor.