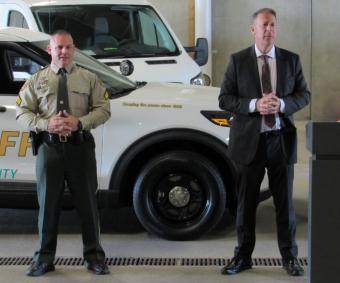 A Promotional Ceremony was held Wednesday at the Sheriff's Office promoting Deputy Sean Thompson to the rank of sergeant.

Sean Thompson was born and raised in Davenport and is a graduate of Davenport Central High School. In 1990 Sean joined the United States Marine Corps and was deployed to the Persian Gulf, Japan, Fort Bliss, Texas, Kuwait and Iraq. During his service with the Marine Corps, Sean earned the Combat Action Ribbon, the Southwest Asia Medal with 2 stars, the N...ational Defense Medal and the Kuwait Liberation Medal. Sean also received the Meritorious Unit Commendation, Joint Forces Unit Award, Navy Unit Award, Navy Unit Commendation, Piston Sharp Shooter and Rifle Expert. Sean was honorably discharged in 1994 and stayed in the In-active Reserves from 1994-1998. After the military, Sean worked at Per Mar Security and Iowa 80 Group Truck Stop. In 2008 Sean joined the Scott County Sheriff’s Office Reserves and was hired as a full time deputy in 2009. While working as a deputy, Sean has been in the Patrol Division, the Civil Division, has been a member of the FBI Gang Task Force, worked as an accident investigator, a field training officer, an SRT commander and sniper, the Iowa Sheriffs and Deputies Association legislation representative and is the former president and vice president of the Deputy Sheriffs Association union. Sean raced BMX bicycles professionally from 1988 to 2016, and in 2007 represented Team USA at the World’s in British Columbia, Canada. In Sean’s spare time he likes to mountain bike, weight lift and spend time with his wife Tara and two kids Jacob and Molly.