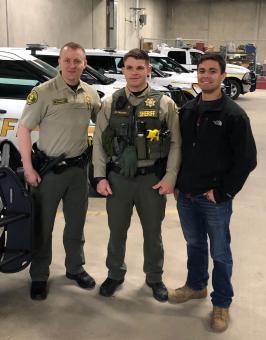 The Sheriff’s Office recently hired three new Deputies that will be joining our Patrol Division over the next few months. Deputy Rubino and Delgado just graduated the Iowa Law Enforcement Academy on Wednesday. Deputy Mauro will start the Academy in the next few weeks. The Sheriff’s Office would like to Welcome and Congratulate them on their hard work and being with us here in Scott County.

Shortly after Graduation, Brad acquired a position with AlliedBarton Security Services where he worked corporate security for John Deere at the World Headquarters in Moline, Illinois. In August of 2014, Brad worked at an armored truck company called Garda Cash Logistics as an armed driver and armed messenger. While maintaining employment with Garda Cash Logistics, Brad also began working for the Scott County Conservation Department as a Seasonal Park Patrol Officer.

In May of 2016, Brad began his law enforcement career as a Correctional Officer for the Scott County Sheriff's Office and in June of 2016 he was sworn in as a Reserve Deputy Sheriff for the Scott County Sheriff's Office. Brad was hired as a full time Deputy Sheriff in December of 2020 and began the Iowa Law Enforcement Academy (ILEA) in January of 2021. On Wednesday April 21, 2021, Brad graduated from ILEA at the top of his class and earned the Top Scholastic award for the highest academic achievement for the 296th Basic.

Brad currently resides in Scott County with his wife Lindsey and their two children.

Edward Mauro is originally from Northeastern Pennsylvania and graduated from Lake Wallenpaupack Area High School. He Joined the Marine Corps in 2005 where he attained the rank of E-6 Staff Sergeant. He completed 4 combat deployments to Iraq and Afghanistan and received an Honorable discharge in 2015.

In October 2018 he was hired by the Scott County Jail and worked as a Corrections Officer until being hired as a Deputy in November of 2020. He currently resides in Bettendorf with his Wife Emily and their 2 daughters.

Carlos Delgado is originally from Chicago, IL. Deputy Delgado is a graduate of Notre Dame High school in Niles and a graduate from Western Illinois University with a bachelors in fire science. He joined the Illinois National Guard in 2013 and is currently a corporal. Deputy Delgado is currently waiting for the pandemic to end so he can get married to his fiancé, Allie. They are currently residing in Cedar Rapids, IA and will be moving soon to the Scott County area in May.