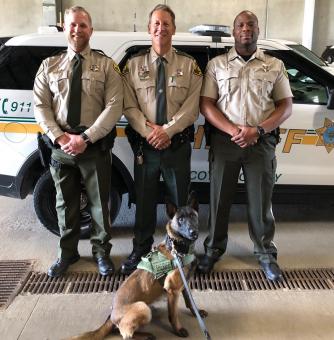 The Scott County Sheriff's Office held a Swearing in Ceremony this morning for Deputy Justin Holmes, Deputy Eric Williams, and Deputy K9 Denali.  They were sworn in by Sheriff Tim Lane.

Justin Holmes is originally from Dubuque, IA and graduated from Dubuque Wahlert High School. After graduating high school, Justin attended Southeastern Community College in Burlington, Iowa where he played baseball and received an Associate’s degree. Justin then went on to St. Ambrose University to pursue his studies and baseball, and graduated with a BA in Criminal Justice. Justin began his law enforcement career with the Rock Island County Sheriff’s Office Jail for a year and one-half, worked as a deputy for the Rock Island County Sheriff’s Office for two years, and worked as a police officer with the Rock Island Police Department for over 11 years before coming to Scott County. Justin served five years with the Rock Island Police Department Tactical Operations Division, seven years with their Emergency Response Team and worked two years undercover with the Quad City Metropolitan Enforcement Group (MEG). Justin has been married for 10 years, has 3 children, and is the head coach for the Quad City Hitmen 8U baseball team and helps coach a 5 and 6U Quad City Hitmen team.

Eric Williams is originally from Monterey, CA and moved to Danville, IL in 2000 and graduated from Danville High School. After high school, Eric attended Danville Area Community College where he earned an Associate’s degree in criminal justice, while also studying Fire Science and Emergency Medical Services. From 2010 to 2018, Eric served in the Illinois National Guard. From 2013 to 2016 Eric served as a volunteer firefighter with the Lynch Area Fire Protection District as a firefighter/EMR and served as an auxiliary officer with the Village of Westville Police Department until he was approved to go to the part-time academy. A few months after graduating the academy, he was hired full-time by the Lewistown Police Department and served as a crisis intervention officer, community resource officer, juvenile police officer and school resource officer. From 2018 until June 2021, Eric served with the Knox County Sheriff’s Department as a patrol deputy and earned accreditations as tactical patrol officer, SWAT, crash re-constructionist, wilderness search and rescue, emergency medical responder and tactical medicine. In his free time, Eric enjoys taking on physical fitness challenges, in 2019 Eric participated in multiple triathlon events in Iowa. Eric enjoys the study of martial arts and spending time with friends and family.

Deputy K9, Denali is a 16 month old Belgian Malinois that was obtained from North Iowa K9. She is a multi-purpose K9, meaning she can be utilized for narcotics searches, tracking of suspects, article searches, building searches, and bite apprehension. Denali’s first shift was on May 2nd and she has already been successfully deployed twice for patrol duties. She looks forward to a long and rewarding career with the Sheriff’s Office