Swearing In and Promotional Ceremony 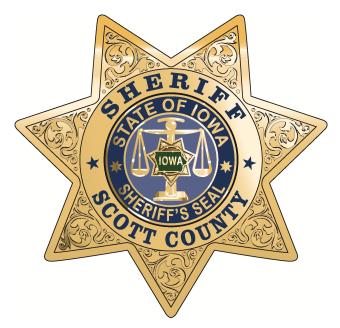 On Wednesday, December 7, 2022, at 0900, the Scott County Sheriff's Office will hold a Swearing in Ceremony and Promotional Ceremony at the Sheriff's Office Headquarters at 3206 South 16th Avenue in Eldridge. Matt Fowler will be sworn in as a reserve deputy sheriff, Harrison Jestel, Eric Long, Nicholas Bougie and Kavon Grubbs-Hampton have been hired as the newest deputy sheriffs for Scott County and Sergeant Sean Thompson and Deputy Chad Weipert will be promoted.

Matt Fowler was born in Davenport and graduated from Davenport North in 1988. He was a military police officer in the United States Army from 1988 to 1992. Matt Fowler worked in the Scott County Jail in 1996 and worked in the Muscatine County Sheriff’s Office as a Deputy from 1997 until 2008. In 2008 he started with the Muscatine Police Department where he serves as a police corporal on dayshift where he serves as a field training officer and is a SFST Instructor. Matt has been married to my wife Lyn for 24 years and has 3 adult children.

Harrison Jestel grew up in Davenport, Iowa and graduated from Davenport Central in 2015 where he participated in Baseball, Basketball, and National Honors Society. Harrison attended Muscatine Community College then transferred to Blackhawk College to finish his Associates Degree. Harrison obtained his undergraduate degree in accounting as well as a master’s in arts of Management (Sports Management Focus) from Briar Cliff University in Sioux City, Iowa. While in college Harrison played baseball, made academic honor roll, and was involved in various community service days. Harrison’s hobbies include working out, hunting, and spending time with family and friends. Harrison is the son of Harold and Lorraine Jestel, he has two siblings, and his grandfather, Donald Jestel, worked for the Scott County Sheriff’s Office as a deputy, posse member, and a bailiff.

Eric Long grew up in Davenport, Iowa where he graduated from North Scott High School and attended Iowa Central Community College. He previously worked at Premier Metal Art and the Davenport Police Department. He enjoys spending time outdoors with his family and friends.

Nicholas Bougie was born and raised in Davenport, IA, graduated from North High School in 2018, and completed 300 plus hours of community service in organizations like the American Legion and the Davenport Community School District. After graduation, Nicholas enlisted in the United States Marine Corps as an infantryman, eventually attaining the rank of sergeant, and receiving assignment to his current unit in Des Moines, IA. After the completion of his active-duty training, Nicholas has spent three (3) years as a frontline supervisor with United Parcel Service (UPS). Currently, Nicholas is pursuing a bachelor’s degree in emergency management, and enjoys lifting weights, kayaking, rock climbing, and mountain climbing.

Kavon Grubbs-Hampton was born in Rock Island, Illinois and raised in Davenport, Iowa. Kavon attended West High School and went on to graduate from Scott Community College. Kavon has served in the Army National Guard for 5 years. He trains in mixed martial arts in his free time. Kavon has served overseas and is now looking forward to serving at home.

Sergeant Sean Thompson will be promoted to the rank of lieutenant. Sean Thompson was born and raised in Davenport and is a graduate of Davenport Central High School. In 1990 Sean joined the United States Marine Corps and was deployed to the Persian Gulf, Japan, Fort Bliss, Texas, Kuwait, and Iraq. During his service with the Marine Corps, Sean earned the Combat Action Ribbon, the Southwest Asia Medal with 2 stars, the National Defense Medal, and the Kuwait Liberation Medal. Sean also received the Meritorious Unit Commendation, Joint Forces Unit Award, Navy Unit Award, Navy Unit Commendation, Pistol Sharp-Shooter, and Rifle Expert. Sean was honorably discharged in 1994 and stayed in the In-active Reserves from 1994-1998. After the military, Sean worked at Per Mar Security and Iowa 80 Group Truck Stop.  In 2008 Sean joined the Scott County Sheriff’s Office Reserves and was hired as a full-time deputy in 2009.  While working with Scott County, Sean has been in the Patrol Division, the Civil Division, has been a member of the FBI Gang Task Force, worked as an accident investigator, a field training officer, an SRT commander and sniper, the Iowa Sheriffs and Deputies Association legislation representative and is the former president and vice president of the Deputy Sheriffs Association union.  Sean was promoted to the rank of sergeant in June 2020. Sean raced BMX bicycles professionally from 1988 to 2016, and in 2007 represented Team USA at the World’s in British Columbia, Canada.  In Sean’s spare time he likes to mountain bike, weight lift and spend time with his wife Tara and two kids Jacob and Molly.

Deputy Chad Weipert will be promoted to the rank of sergeant. Deputy Weipert was born and raised in Davenport, graduating from the Davenport Community School District and then Scott Community College with a focus in Law Enforcement. He was hired by the Scott County Sheriff’s Office in 2006 and worked in the Scott County Jail until 2008 as a correction officer. In 2008 Chad was hired by the Maquoketa Police Department and graduated from the Iowa Law Enforcement Academy in December of 2008. He worked with the Maquoketa Police Department until 2010 when he was hired by the Scott County Sheriff’s Office. With Scott County Deputy Weipert worked 3rd shift patrol until March of 2015 when he was assigned as school resource officer at Pleasant Valley High School, working in that position until November of 2018. In November of 2018 he was assigned to the Scott County Criminal Investigation Division as a detective. During Chad’s tenure at Scott County, he became a taser instructor, a special response team (SRT) member since 2013, a crime scene investigator, a crisis negotiator, and an ALICE instructor and a field training officer (FTO). In his spare time Chad enjoys hanging out with his wife, Kerri, and his kids Wyatt and Gabbie, coaching baseball, and attending his kids’ many events.