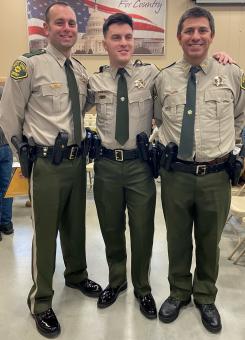 We would like to Congratulate Deputy J. Johannes, Deputy K. Ahrens, and Deputy C. Law for Graduating last Friday from the Iowa Law Enforcement Academy. They have spent the last 16 weeks away from their families to accomplish becoming a Certified Officer. All three will have roughly another 16 weeks of Field Training before they will be solo.

Jeremy Johannes is originally from Belvidere, IL and graduated from Belvidere North High School. Jeremy built and welded trailers from 2014 to 2018 and eventually moved to Davenport and worked for John Deere. After 3 years at John Deere, Jeremy went to J.T. Cullen and worked there until his hiring with the Scott County Sheriff’s Office. In 2018 Jeremy married his wife, Samantha. Jeremy and Samantha have two boys, ages 5 and 2.

Kobe Ahrens was born and raised in Bettendorf, Iowa and graduated from Bettendorf High School. Kobe received his bachelor’s degree from the University of Iowa with a major in Criminology Law and Justice with a minor in Military Science. Kobe was a member of Iowa Army ROTC, commissioned into the Iowa National Guard 185th CSSB and is currently a second lieutenant specializing and branched in military intelligence.

Clinton Law was raised in Basco, IL. He earned his BA of Interdisciplinary Studies with an emphasis in Behavioral Sciences from Western Illinois University. He also holds an MS in Curriculum and Instruction as well as an MBA from Western Governors University. Clint was most recently employed as a special education teacher. His hobbies include playing guitar, riding motorcycles, martial arts/fitness training, aviation and spending time with his wife, Erin, and his 20-month-old son.