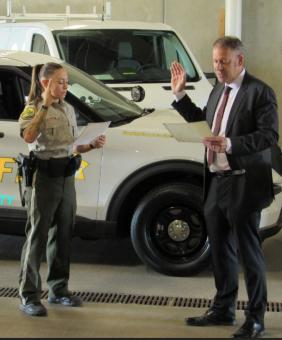 The Sheriff’s Office had a swearing in ceremony Wednesday for Deputy Misty Bunker. She was sworn in by Sheriff Tim Lane and will be joining our Patrol Division as soon as she completes her field training.

Misty Bunker was born in Oregon and was raised in California. Misty joined the United States Army in 1997 and was commissioned as a Chief Warrant Officer in 2007 and retired in 2016. Misty completed 5 combat tours of duty, 3 in Iraq and 2 in Afghanistan. While deployed, Misty ...trained both the Iraq and Afghanistan Armies and took part in every major operation of the Iraq war, to include the invasion in 2003, the siege in 2006 and the drawdown in 2010. Misty was awarded 2 Bronze Stars and the Combat Action Badge for combat operations. Misty has been stationed all over the world to include Germany, Japan and Africa. Misty graduated with a bachelor’s degree in Kinesiology and a minor in education from the University of Maryland. After retirement, Misty became a Nationally Certified Emergency Medical Technician and worked part time and volunteered over 500 hours for MEDIC EMS. Misty has worked as a part time officer for the cities of Blue Grass and Aledo, Illinois and became Iowa certified in April 2020. In Misty’s spare time she is a personal trainer and a pro-bodybuilder and enjoys spending time with family and friends.