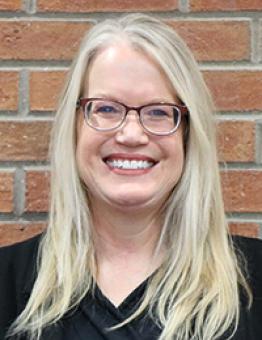 Jean Dickson was elected to the Board of Supervisors in November 2022 and was sworn in January 3, 2023.

Jean is from Northfield, Minnesota. She graduated from Luther College in 1989 with majors in English and Political Science, and a Spanish minor. She graduated from the University of Iowa College of Law in 1992. In 1991, she was an intern for the Scott County Attorney’s Office. After law school, she was a judicial law clerk for the Iowa Court of Appeals. In 1993, she joined the law firm of Betty, Neuman & McMahon in Davenport and has been a partner since 2000. Jean specializes in workers' compensation defense and appeals. She has appeared before the Iowa Court of Appeals, the Iowa Supreme Court, the Eighth Circuit Court of Appeals and the Illinois Appellate Court, Third District, on appeals ranging from family law to products liability and not limited to workers' compensation.

Jean has been active in community service through her career, having served on numerous boards including Camp Shalom, CASI, Catholic Endowment of Bettendorf, Iowa, Inc., and Our Lady of Lourdes Parish Council. Professionally, she served on the Statewide Nominating Commission and the Iowa Board of Law Examiners. She is a former president of both the Scott County Bar Association and the Iowa Association of Workers’ Compensation Lawyers, Inc. Jean served on the Pleasant Valley Community School District Board of Directors from 2013 to 2021. She currently sits on the Bettendorf Civil Service Commission and is a member of the Bettendorf Rotary.

Jean is married to Greg Vens, and together they have six children. They reside in Bettendorf. Greg is a senior engineer for Parr Instrument Company in Moline, Illinois.

Her responsibilities on the Scott County Board of Supervisors include service on the Regional Development Authority, the Seventh Judicial District Court Services Board, Urban Transportation Policy and Workforce Development / Region 9 Elected Official Board.