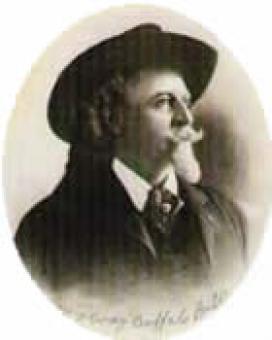 Buffalo Bill Cody has been glamorized and criticized for over 100 years because of his role as a government scout, buffalo hunter, and Wild West Show promoter, this article will help you to learn more about him and understand the complex nature of this legend from the Old West.

Isaac and Mary Cody, parents of the legendary, Buffalo Bill, moved their family from Cincinnati, Ohio to Iowa in 1840. In 1841 they settled near LeClaire, where Buffalo Bill Cody was born and raised.

William Frederick Cody was born on February 26, 1846 on a farm in "Napsinekee Hollow" just outside of LeClaire. The site of the original Cody log cabin, which had only two rooms and a loft. The cabin is gone now and the field is currently being farmed, but similar cabins can be seen at Walnut Grove Pioneer Village.

The Cody family's second home was at Pinnacle Point in the Wapsipinicon River Valley in rural Scott County, Iowa. The family lived here temporarily while Isaac Cody built the Cody Homestead , the limestone building that currently stands on a hill overlooking the river valley.

In 1849 Isaac Cody moved his family to the City of LeClaire. They made their home in a house made of hewn oak with mortised joints and the walls were covered with split oak lath. It was located along what presently is North Cody Street. There is a private home there now, but a plaque stands on the west side of the road.

The actual home the Codys lived in is now on display in Cody, Wyoming. It was moved via railroad in 1933.

Young William began his schooling in LeClaire, but soon found his love for riding horses and swimming in the Mississippi River was greater than his love for learning the alphabet. This is when his great desire for adventure and appreciation for the outdoors developed.

After living only a short time in LeClaire, the Codys moved again, this time to Walnut Grove in rural Scott County. While living here, the eldest son, Samuel was thrown from a horse and killed. His grave site is at the historic Long Grove Church Graveyard in Long Grove. Besides the death of their son, two other events prompted the Cody family into leaving Iowa: the Gold Rush and the Free Soil Struggle of the Kansas-Nebraska Territory. In 1853 Isaac Cody sold his land for $2000 and he and his family left for Fort Leavenworth, Kansas.

Life in Kansas proved to be a turning point in William Cody's life. When he was just ten years old his father was killed during a riot fighting for Kansas to be a free state, leaving young William the man of the house. As a teenager, he became a Pony Express Rider to support the family.

At 21, William Cody served as a scout for the United States Army during the Civil War. Later, he protected the Union Pacific Railroad laborers from Indians while they worked in the West and provided them with fresh buffalo meat.

William Cody became Buffalo Bill when he proved his marksmanship by killing 69 buffalo to his opponent's 46, in a contest with Billy Comstock, a renown scout and guide. The contest took eight hours and netted Buffalo Bill $500 in prize money.

Preserving the Western Way of Life

During these years and his years as a Pony Express Rider, Buffalo Bill became very familiar with the West and sought to show the world what the western way of life was like.

Early in the 1880's, Buffalo Bill began to carry out a cherished idea. He gathered some of the remaining elements of the Western frontier and began to exhibit this unique and fading way of life in the Eastern United States and Europe.

With his exhibition, "Wild West," he toured America and Europe for twenty years. Thousands of people experienced the talents and traditions of legendary Wild West figures like Sitting Bull, Annie Oakley and Calamity Jane. The Wild West Show was considered a circus, by some, for a ring was set up inside a tent, and within it were demonstrations of horse-riding, cattle-roping and mock battles between cowboys and Indians. Buffalo Bill made a fortune from his show, which he invested in lands in Nebraska and what is now Cody, Wyoming.

Now Hiring Seasonal Staff!
We are looking to fill a variety of positions supporting Scott County Conservation managed parks, facilities and activities. Positions can start as early as March and end as late as October. Deadline: Open until filled. APPLY NOW: scottcountyiowa.gov/conservation/employment
Golf Course Closed for the Season
Glynns Creek Golf Course is officially closed for the season. However, the pro shop will be open Tuesdays through Saturdays, 9am to 4pm, starting November 30th until December 22nd. It’s the perfect opportunity to get gifts/gift certificates for the golfers in your life. We want to thank everyone...
END_OF_DOCUMENT_TOKEN_TO_BE_REPLACED