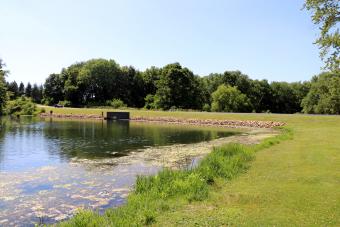 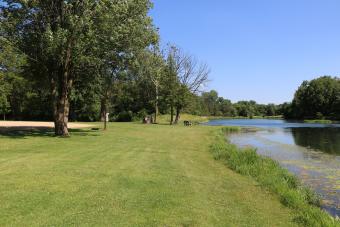 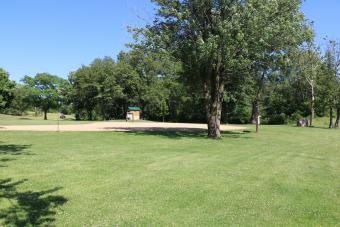 PRIDE Lake is eight acres in size, 15 feet deep and includes a small island. It is located near the south entrance to the park and was dug out in an “L” shape to be visible from Whispering Pines Shelter, a popular lodge in the park. The lake will be stocked with fish in the fall of 2006 and ready for fishing in 2007.

The lake entrance features a huge, 10-ton boulder that was excavated from the bottom of the lake. This rock includes the plaque revealed when the lake was dedicated on June 20, 2006. On the plaque it says: “Lake Odetta was originally constructed in 1964. Erosion cased the lake to silt full by the mid-70’s. With the vision and cooperation of Larry Mattusch, County Engineer, the lake has been reclaimed over the last 3 years through the teamwork of Scott County Secondary Roads and Conservation Board employees.

The lake was renamed in honor of this cooperative effort that exemplifies the County’s P.R.I.D.E. philosophy.

Originally, Lake Odetta was a 15 acre lake constructed in Scott County Park during the 1960's. By the late '70's, the lake was unusable due to siltation from agricultural and residential development runoff. With the assistance of Scott County Secondary Roads, dredging started in December of 2002. This has involved hauling the excavated soil to various locations in the park where it is being used and stockpiled for current and future landscaping and construction projects. The warm weather has forced us to stop hauling for this season, with approximately 50% of the soil removed. Once the project is completed, we will be constructing siltation ponds within and park, as well as working with our local Planning and Development Department and the NRCS office to identify potential sources of erosion so that we can work with farmers and developers to improve the quality of the watershed.