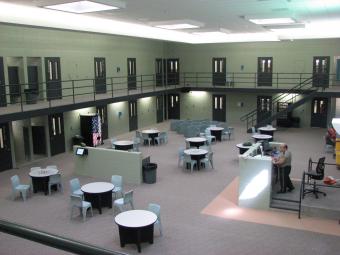 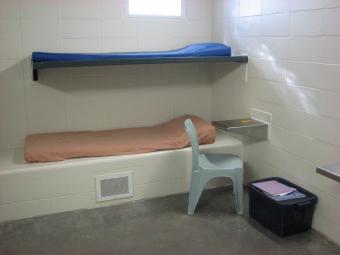 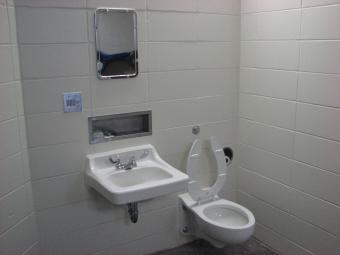 The Scott County Jail is designed to ensure that staff is in control of all areas of the facility and can actively manage and control inmate behavior.

The housing areas are appropriately sized for both long and short-term use and include a dorm and flex housing. Some housing units contain sub-dayrooms that can be used to house inmates separately within the same housing unit and contain showers and phones. There are handicap accessible accommodations for female and male housing areas.

The Jail provides inmates an opportunity to purchase a variety of items from the commissary to help maintain good morale and enhance their stay at the Jail. Some items may be ordered weekly and some may be purchased through vending machines located in the housing units. Availability of commissary is reflective of the inmate’s behavior. Commissary is a useful tool for the Housing Officer in managing inmate behavior within the housing units.

Housekeeping is a necessary function and all inmates are required to contribute to the daily routine cleaning of their assigned housing unit.

Inmates have access to reasonably priced phone calls to maintain community ties and to allow contact with the courts and counsel. Inmate phone privileges may be restricted based on behavior.

All housing units have televisions. Inmate television privileges may be restricted based on behavior.

Inmates are encouraged to use Inmate Request Forms for any issues or needs the Housing Officer may be unable to address. This could include such issues as:

The Jail provides inmate hair care services for inmates to maintain proper hygiene. An outside barber is available every three (3) weeks with a site charge of $13.00 per inmate. An inmate is not denied a hair cut because of a lack of ability to pay.

New Deputies
The Scott County Sheriff's Office held a Swearing In Ceremony this morning and swore in Deputy Sanchez and Deputy Miller. They will be joining our Patrol Division in the next few months. Congratulations and welcome to Scott County. Aimee Sanchez is originally from Chicago, IL and graduated from...
New Correction Officers Hute and Douglas
The Jail would like to introduce their two newest corrections officers, Officers Dominique Hute and Jennah Douglas. Dominique is from the Chicago area and graduated from Western Illinois University in 2017 with a bachelor’s degree in Forensic Psychology. Dominique has 4 years of experience working...
END_OF_DOCUMENT_TOKEN_TO_BE_REPLACED